Everyone has heard of Ticket to Ride. It's one of the more popular games that are available. Today we take a look at the top 5 expansions for the game as they add a lot more content to a game that you probably already love playing. If you are just starting out with the Ticket to Ride series and want to know more about the general expansions, we have a handy guide ready for you here: Ticket to Ride Buyers Guide.

Here are the best expansions for Ticket to Ride: 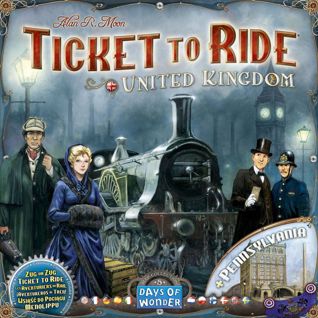 This expansion ranks as the best Ticket to Ride expansion on Boardgamegeek and I agree with that. There are two maps, both with a very different mechanic and difficulty. The United Kingdom map has the craziest mechanic seen so far. You are not able to build everywhere yet, but have to unlock that through the use of upgrades that you buy with locomotives.

On the other side, you have the Pennsylvania map. This map is a more traditional map but comes with a stock mechanic. When you build a track, you get a stock of a given company. If you have the most stocks of a given company at the end of the game, you'll get additional points. This is great because you might want to really get the first place at a company, but maybe it doesn't help you with your destination cards at all.

Place the first rails of the glorious train adventure that all started in the United Kingdom of Great Britain and Ireland in the 19th century. Learn to master the power of steam to build trains that go faster and farther, develop your technologies, and reach the far cities of Scotland and Ireland before your opponents!

Also includes the Pennsylvania map – in a state full of railroad history, invest in the most profitable companies to develop your rail network. But do not let your opponents outbid you, or you risk losing the benefits of your investments! 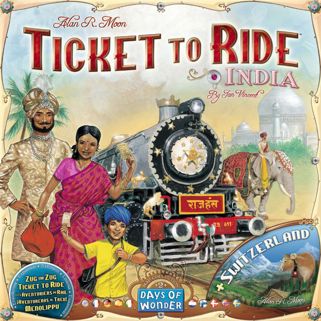 The India & Switzerland maps are both great maps to play on. With the India version, you'll want to make the longest train track because you'll be awarded for it at the end of the game. You'll also want to connect your cities through multiple distinct tracks, giving you even more points at the end of the game.

Switzerland is a smaller map than usual and also doesn't support 4 players. If you are someone that likes Ticket to Ride, but always thought the main maps were so big? Then this map might be good for you. You are able to play on this with 2-3 players. Another mechanic of this map is that instead of always going from city to city, you might get some destination cards that you must connect to a country. Make sure you are on time before all spots to that country have been occupied.

Embark on a tour of Ian Vincent’s India and discover one of the most densely populated and colorful countries of the world. The year is 1911, and the world is changing fast in the British Raj. Will you complete your Grand Tour in time, or lose to more cunning – or simply better connected – opponents?

Also includes Alan R. Moon’s terrific map of Switzerland, specifically designed for 2 and 3 players and made famous by Ticket to Ride Online! Discover Switzerland’s challenging geography with its verdant valleys and mountain passes, as well as the charm of its neighboring countries. 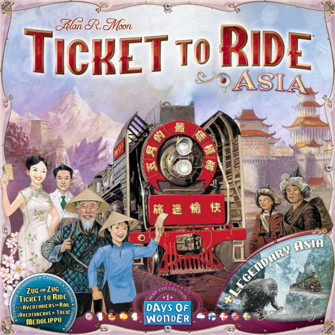 These maps look almost the same as they are both played in Asia. However, the legendary map has some legendary routes that give you points in exchange for your train carts. You will not be able to get your train carts back anymore after that, so make sure to see if they are worth the points.

On the normal Asia map, you'll be able to play in team mode. Each team, consisting of 2 players, has their own hand of cards but also has a shared pile that they can fill up to help one another. This map is very fun if you are consistently playing with a bigger number of players than usual.

Embark on an incredible adventure in Alan R. Moon’s Team Asia map as you and a partner compete against other teams on a 25,000 kilometer ride from Kabul to Beijing, through the steppes of Mongolia and the Gobi desert up to the Yellow River!

Or, if you prefer the quiet pleasures of traveling alone along the Silk Road, or winding your way through the hustle and bustle of Indochina, venture into the forbidden eastern lands of François Valentyne’s Legendary Asia. Just be ready for a hair-rising ride through the mountain passes of the Himalayas! 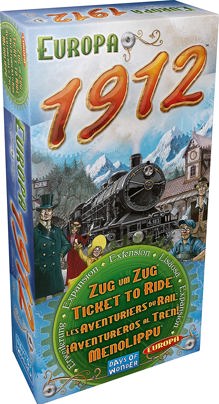 While not a map expansion, Ticket to Ride: Europe 1912 expands on the already successful map of Europe. This expansion gives you another copy of destination cards in the odd chance that they have been damaged, but also gives you big cities destination cards. Those cards only go to and from big cities, making them a very busy point for all players. Along with that, the expansion also comes with warehouses & depots which, if used correctly, can allow a player to get a lot of train cards in his hand.

Ticket to Ride: The Heart of Africa 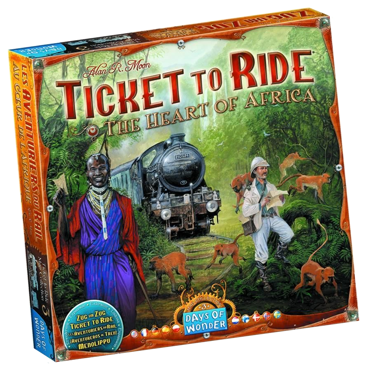 Ticket to Ride: The Heart of Africa consists of only one map while the others usually have multiple. This map features terrain cards. There are three types in total: Desert/Savanna, Jungle/Forest, and Mountain/Cliff. These can be used to build your train tracks. Kinda like the normal train cards that you use. However, under certain conditions, they make it easier to build the tracks.

Venture into the Heart of Africa to build routes through some of the continent’s most remote and desolate locales. Will you bolster your terrain surveying skills and local knowledge to try and establish more valuable routes – or dare to dash across the continent in a mad race to cut the game short?