Machi Koro is a game where you are building your city and trying to expand it with landmarks like an airfield or train station. The player that manages to build all their landmarks first, wins! Machi Koro has a few different versions and it's good to know what each of them does so that you know exactly what to buy!

In Machi Koro, you try to be the first player to build all the landmarks. You can build landmarks by buying them with coins. You'll be able to get coins through other buildings in your city. Every round a dice is thrown (or multiple if you have the correct landmark) and every building with the rolled result will trigger. This usually results in getting some coins, but it can also result in you having to pay your opponent some money. You can then use the money to buy more buildings and expand your city.

Like every other game, Machi Koro has a base game that you should get first. This box will give you all the cards to play a 4 player game. If you are planning on playing Machi Koro then this is what you want to get first. If you like this game and want more of it, there are 2 expansions that you can add.

If you really like Machi Koro, then this expansion might be one for you. In this expansion you'll get 3 more landmarks to complete, making the game a bit longer to play but who doesn't want to play more Machi Koro? One of the landmarks is even completed at the start of the game so that you always get the effect. Along with that, the game features a different way to layout the market. Instead of laying out all the types of cards in one go, you'll be placing rows of cards and not all cards will be available from the start.

The expansion also allows you to add a 5th player to the mix. Even more Machi Koro fun for everyone! And of course, you'll be getting more buildings that you can buy and put in your city. Some with some effects that are not seen in the base game!

Machi Koro: Millionaire's Row doesn't contain any special mechanics like the harbor expansion. It only contains new buildings that you can buy and place in your city. Most buildings are unique and have a new mechanic. There are now buildings that let you demolish landmarks and buildings that only trigger if you have 2 or fewer landmarks, making them good at the beginning of the game but making them useless in the late game. Unless you trade them with your opponents and get one of their good buildings. This expansion is basically more Machi Koro and who wouldn't want that?

This version of the game is a bit strange. At first, I thought this was an extra expansion for the game, but it's not! This is a standalone version of the game and contains most of the game and the expansions in one box. It also features a night theme, so all the cards have a night version instead of the normal day version. This is basically a 2.0 version of Machi Koro as some cards have also been balanced. However, there have been some mentions of this version not being supported. So if you are missing any cards, you might not be able to find them anymore. 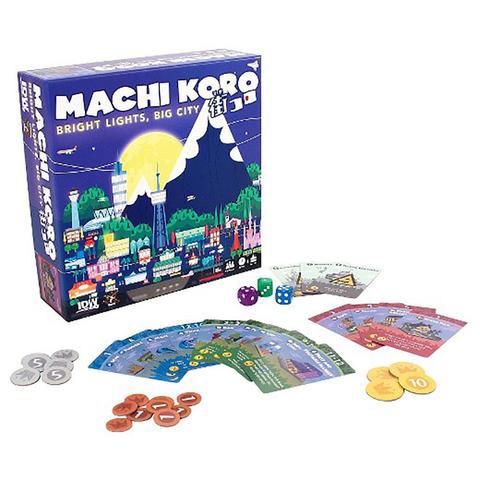 This version of the game is only available in Germany (and maybe The Netherlands as well). In this game, instead of creating a city, you are creating your own soccer stadium. This is basically a reskin from the first game, so you won't be missing any special features or mechanics. You should get this if you like the soccer theme more, but beware that it might be a bit weird to play this with the other expansions.

Machi Koro: Legacy is a different type of game from the other version. In a legacy game, you go through multiple games, and throughout those games, you'll unlock things, remove things. It's basically a campaign that you'll follow through. This is the same in Machi Koro: Legacy. You'll be playing 10 games in which you'll play the normal Machi Koro rules that we all know and love, but you'll be unlocking new buildings, new mechanics throughout those games. Those can also be influenced by the decisions you make.

Some legacy games don't allow you to play them again after you finish them. Pandemic Legacy is also a legacy game and you destroy cards while playing it, put stickers on it, and more. Machi Koro: Legacy is not like that. There are some parts that have those aspects, but if you ignore those then you will be able to play Machi Koro: Legacy like any other Machi Koro game at the end.

I do think that you should try the traditional game first and maybe then move towards this version if you are interested in the campaign stuff and some new mechanics. You'll then at least know if you like the game and if you'll be able to get through the 10 games for the campaign.

And those are all the versions that are available for Machi Koro at this moment. When other versions become available, they will be added to this list as well. If you have any questions, you can always ask them on Twitter: Budgetboardgaming

Where to buy Machi Koro

Now that you have all the information on the various different types of expansions, versions, and editions. It's time to find the best place to buy the game. Budgetboardgaming shows the prices of most of the game stores out there! Just try out the search and see what is available for you. Is there a store missing? Contact us and we'll see if we can get it added to the website.