Caverna has been sitting on the top of the BoardGameGeek list for some time now. The game was released in 2013 and isn't planning on falling down of the ranking list. You would expect such a popular game to have a lot of expansions as it has had some years to create them. When you take a look at games like Ticket to Ride or Catan, you can clearly see that popular games usually also get a lot of expansions. But Caverna is actually not like that. Let's take a look at the expansions that you can find for Caverna!

In 2014 & 2015, Caverna got 3 expansions. However, they are very small and usually just consisting of only a few extra tiles. These are also the cheapest expansions that you can find, but it might be difficult to track some of these down. The expansions are as followed:

Caverna: Cave vs Cave is a 2 player variant of the Caverna game. It allows you to try out a faster version of the actual game and see if you like what you see! Opinionated Gamers has a great review that you can find here: https://opinionatedgamers.com/2017/08/14/caverna-cave-vs-cave-game-review-by-chris-wray/ 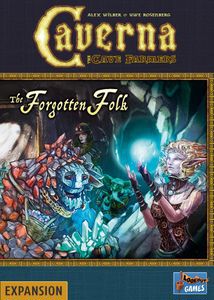 Caverna: The Forgotten Folk started as a fan project on BoardGameGeek, but eventually made it out to become a real expansion for the game. This expansion allows you to play with different species and/or race packs instead of only being able to play as dwarves. Each species has its own advantages and disadvantages as well as unique rooms.

If you are looking for a good expansion for the game, then this is one that really changes the way you play the game! There are also two promos available that allow you to add more species to play as: 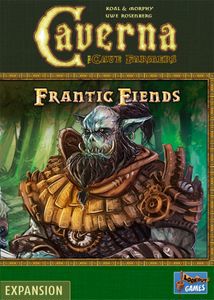 Caverna: Frantic Fiends is the latest big expansion for the Caverna base game. This expansion is planned to be released in 2022, so we can't quite say how good this expansion is yet and exactly what it contains. According to the publisher, the expansion will be focused on a fighting aspect. You'll have to use your axes and traps to keep intruders out of your caves. Defeating the intruders will award you with precious rewards, but failing to do so might put your plans at risk