When you start looking into the world of miniature skirmish games, you'll most likely come across two games: Godtear and Skytear. But maybe you aren't interested in buying them both, as they can get quite expensive. In this post, I'll go over the differences between the two and give you my final verdict. However, make sure to go over all the differences and make a choice yourself. My opinion might be different than yours and you might find the other game more interesting.

In this post, we'll go through different categories where I'll tell you the differences between the games. These categories are:

We'll start out with the topic of gameplay. In this topic, we will cover both games and see what they focus on. Both games are miniature skirmish games with multiple expansions to add new fighters, so we will not have to go over that.

The game consists of multiple rounds and each round consists of two phases. At the end of each round, the player with the most points will win that round and going 1,2 or 3 final points. These final points are the actual scoring and count toward winning the game. This means that you can lose the first two rounds and then win the third to gain as many points as your opponent. Timing and planning for this are key here.

Godtear does not use a deck but does have champion-specific cards and abilities so that every champion feels different. One key thing is that Godtear uses a dice. This is used for doing damage and does introduce a bit of luck and randomness into your games.

Skytear is a 4vs4 miniature skirmish game that is inspired by the MOBA genre. The maps are therefore also designed that way. You'll usually have 3 lanes (although maps exist with fewer) and the maps contain towers that you'll have to destroy. In each round minions will spawn that will push toward towers on each side. And you also have the middle area where a boss will spawn in one of the turns.

The way to win is by completing certain objectives that are shown at the start of the game. So winning the game could be different each time that you play. Each of your champions have special abilities and have special classes that interact with each other, so bringing the right team is also important here. Skytear consists of multiple turns and multiple phases.

Skytear does utilize a deck where you can pick cards to build your team a certain way. Other than the randomness of the cards drawn, there isn't a lot of it in the game. Pricing is always important with these sorts of games. These games keep on expanding with new expansions and usually, you'll have to keep on top of the expansions to have a viable team. Both of these games are expansive, but they also have a starter kit that you can buy to see if you like the game.

Godtear has two starter kits. Both contain 2 champions and everything else you need to play. They provide you with a great and easy way to try the game however if you want the full experience (3vs3) you'll either have to buy the other starter kit and 2 expansions or 4 expansions in total. That is quite expansive if you want to try the full experience.

The starter kit costs around 55 euros and each expansion costs around 32 euros. So if you want to get a 3vs3 game going, you'll have to pay around 160 euros to try it out.

Skytear only has one starter kit, but this contains everything that you'll need to play the game like it is supposed to. By buying this starter kit, you'll be able to play 4vs4 as it will come with 8 heroes in total. However, if you want to play the map with 3 lanes, you'll also have to buy one expansion to get enough heroes to play with. 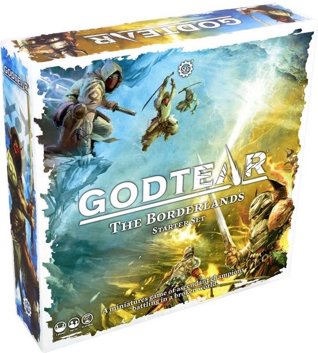 Quality, especially on the miniatures, is important to really sell a game. Even though quality doesn't make a game, it can certainly bring it to new heights if done correctly. For both games, the quality is great. The miniatures look great, the rulebooks look great and the maps also look really good. It is hard to really find differences here, so I won't try to do so. Quality-wise, both games are really good.

The support around a game that is supposed to keep on going for many years is very important. If there is no support or no community around these games, then it becomes very difficult to get attached to them and to find people to play with.

Godtear has a community on Discord where you'll find most of its online players. They keep tournaments every now and then and there are usually some people looking for a game there. As for the support from the publisher, it is a bit difficult. Looking at the upcoming releases, I can only see one champion currently coming up, and haven't seen anything about plans for next year. It would be great if there was a bit more news about that.

Skytear also has a community on Discord, but I think they are a bit larger and more active than Godtear. They also have tournaments every now and then and also have people looking for games on there. Though the support from the publisher is really interesting and unique here. By participating in their monthly leagues, you'll be able to earn points that you can then spend in a special online store. In my opinion, both games are a great addition to any player's board game collection. However, I personally find Skytear to be the better game. The gameplay of Skytear more suits me than the gameplay of Godtear. And I am personally not a fan of having to buy two starter kits and some expansions to be able to experience the game like it is supposed to be. The starting value of Skytear is just so much better.

This is just my opinion though. Make sure to read through all the points and make a decision yourself. Either way, if games like this interest you then choosing either of the two will be a great choice!