Welcome to my first review. I am very excited to tell you about one of the games I played a lot. (When I say a lot, I mean a lot)

Today I will tell you about Hero Realms. In Hero Realms, you are a resident of the city of Thandar. Your goal is to stay alive and eliminate your opponents.

The city is divided into four factions.

Imperial faction: What is left of the once-great army

Wild faction: Everything that can be found in the forests around the city

Each faction works well with others in their faction. Which can give them combo bonuses. Each faction has both champions and actions they undertake.

To gain champions and actions you have to go buy them at the market. Make sure you invest your precious gold well.

Each player starts with an identical 10-card deck. The person who goes first gets to draw 3 cards from his/her deck. The other player(s) draw 5. A card can contain one or more of the following symbols:

Health: Add the number to your total health

Combat: Choose a player or their champion to deal damage to. The player has to subtract the damage from their health, if you target a champion, you have to make sure you can take them out or they will heal themselves before the next turn!

Gold: Use the gold to buy more actions and champions from the market

On top of these symbols, a card can have an effect written on it. They are pretty self-explanatory.

If you plan your strategy well you will take out your competition and win the game. 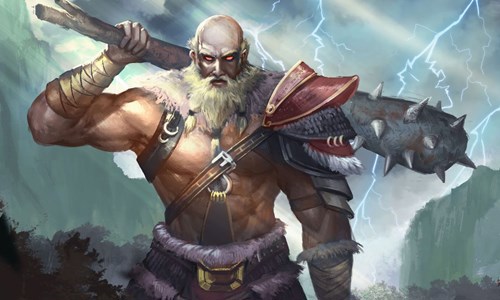 The game is easy to play and quick, which makes it very nice to play if I need to kill some time or aren't feeling like a heavy game. The mechanics are very solid although the rules about preparing a champion can be kinda confusing as the rules don't go into it enough.

With how the mechanics of the game work it can be difficult at times to draw what you need or even to find something in the market. This especially happens when high-cost cards dominate the market early in the game.

But all in all, it's an amazing game that you should definitely give a try for the cheap price it's selling for.

Should you get it?

If you are a fan of quick 2-player games that appeals to either casual or competitive players, then yes, go get it right now!

If you rather play this sort of game with a space theme then go check out Star Realms.

Trust me, you won't go wrong with any of the 2 games.

*Disclaimer: Some pictures used are from the official hero realms website